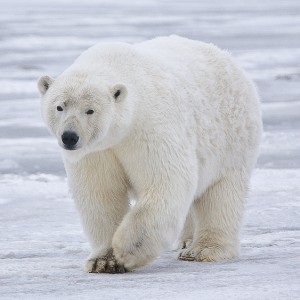 Polar bears, the icon of the global warming movement: theatened, endangered, possibly headed for extinction because of mankind’s indifference to saving the planet. Really?

The polar bear (Ursus maritimus) is a carniverous bear who roams the Arctic Circle area. It feeds mostly on seals. It is a big bear, and a male can weigh as much as 1500 pounds and stand nine feel tall on it’s hind legs. They are actually related to the brown bear; their distinctive color presumably evolved allowing them to survive better in their habitat. They live both on land and on sea ice, roaming their territory looking for prey. They are vicious animals, and will eat a human being as readily as a seal. Other creatures they encounter are just food to them. 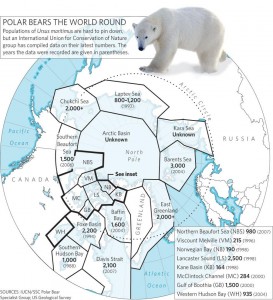 The polar bear is considered a “vulnerable species”,  by the International Union for the Conservation of Nature, largely due to concerns about global warming. This group has classified 5196 animals and 6789 plants around the world as “vulnerable”.

So how many polar bears are there, and how is their “vulnerability” measured? That’s where it begins to get murky.

Part of the problem is no one knows how many polar bears there are. The only way to count polar bears is to fly over them and count. Since their territory is so large, and they are constantly on the move, this is not  a practical method. So what we have are estimates. Since much of their territory has been poorly studied (Wikipedia), estimates by biologists run from 20,000 to 31,000 polar bears in the world. Nineteen “subpopulations” have been catagorized, based on sightings of groups of bears in various areas.

Modern tracking of the bears has only taken place since the 1980’s and is expensive, tagging and tracking bears by helicopter. While there have been increased reporting of bear sightings around populated areas in recent years, some scientists argue that this should not be interprteted as increases in the bear population. Counting of  subpopulations is scattered, and some groups have not been counted since 1992.
The bottom line is that all counts of polar bears are estimates, based on very limited information.

Those worried about the fate of the polar bear contend that shrinking Arctic polar ice reduces the bear’s habitat and food supply, eventually leading to the extinction of the bear.

In 2009, Al Gore warned the Polar ice caps could be gone in five years:

So is Al right? Obviously his 2009 prediction didn’t quite work out that way, the ice is still there. But is he right in general?

It seems almost impossible to get anyhing but conflicting data on the Internet. I looked at dozens of sites; official, semi-official, quasi-official and unofficial.  — All kinds of different “answers”. I’m certainly not a scientist, but all the contradictions made me want to pull my eyeballs out. So here’s what I surmised:

It seems that over the last several million years, the Arctic has undergone over twenty glacial/interglacial (cooling/warming) periods. Some of these lasted for millions of years. The most recent interglacial period, known as the Holocene Interglacial period, lasted about 11,700 years. After warming during the  Medieval Warm Period (950-1250 AD), there was a cooling period from about 1300 to 1850, which has been called the “Little Ice Age”.  Although we appear to once again be in an interglacial period, It is not clear the length of time this will last, nor the cause.

From what I can put together, the Arctic ice pack has a size of about 5.3 million square miles. This shrinks currently to about 1.3 million square miles in the summer.  Most of the sites I looked at suggest the recent overall loss is about 13-15 thousand square miles per year. Some said that this is about 2 percent, but if you do the math, it’s actually .2 percent — big differerence.  At that rate, the ice will turn to water in about 500 years.

Maybe, maybe not. Climate is a funny thing; it doesn’t follow rules, certainly not any of the rules of man. Over the eons, climate change has gone warmer to colder, to warmer to colder, over and over again. In any case, the Arctic Ice is not likely to melt in the next few years as Al projected.

Personally, I think it all has to do with the shifting of the magnetic poles, but more on that in a future article.

So over all, I’m not too worried about the Polar Bear. If things change enough, they’ll likely just move south and turn brown again, like their cousins. 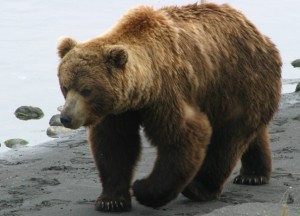 International Union for the Conservation of Nature

One thought on “Polar Bears”