Four score and seven years ago our fathers brought forth on this continent a new nation, conceived in liberty, and dedicated to the proposition that all men are created equal.

Now we are engaged in a great civil war, testing whether that nation, or any nation so conceived and so dedicated, can long endure. We are met on a great battlefield of that war. We have come to dedicate a portion of that field, as a final resting place for those who here gave their lives that that nation might live. It is altogether fitting and proper that we should do this.

But, in a larger sense, we can not dedicate, we can not consecrate, we can not hallow this ground. The brave men, living and dead, who struggled here, have consecrated it, far above our poor power to add or detract. The world will little note, nor long remember what we say here, but it can never forget what they did here. It is for us the living, rather, to be dedicated here to the unfinished work which they who fought here have thus far so nobly advanced. It is rather for us to be here dedicated to the great task remaining before us—that from these honored dead we take increased devotion to that cause for which they gave the last full measure of devotion—that we here highly resolve that these dead shall not have died in vain—that this nation, under God, shall have a new birth of freedom—and that government of the people, by the people, for the people, shall not perish from the earth.

I’ve been thinking that the cars we own are milestones of our personal history. Over the years I’ve owned many cars, and most have a story. Here goes:

1956 Ford Fairlane – My first car. I got it at the end of the summer in 1963, just as I was going into senior year in high school. I worked all summer to save the money for a car. It cost $125. I actually wanted another car on the lot, a Pontiac, but it was too expensive at $200. I drove this car for a year, until I went into the Marine Corps in 1964 and sold it to a friend.  It was a bit of a clunker. Two things I remember most about it is that the radio only worked when it wanted to. There must have been a short in the wiring, because sometimes when I’d hit a bump the radio would go on. I’d hit another bump, the radio would go off. The radio had a mind of it’s own. The other thing I remember was at one point the driver’s side door stopped working. I couldn’t afford to get it fixed, so I tied it shut with a rope and either went in and out through the passenger door or through the window. I was eighteen, and that’s how we rolled back then. 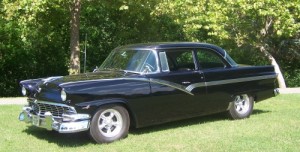 1965 Chevrolet Malibu – This was our first “real” car. We got married in 1967, and bought this car shortly thereafter.  I forget how much it cost, maybe around $1500, but my father had to co-sign the loan with me, as I did not have enough credit.

We took this car to Camp Lejeune when we moved there in April, 1967. I really liked this car, and actually took pretty good care of it. I washed it and polished it, and even added tape red “pin stripes” to it. All was good until the accident.

We were going to visit friends one evening. I was stopped, making a left hand turn, waiting for oncoming traffic to pass. All of a sudden “BAM” we got ass-ended.  The guy driving the other car wasn’t paying attention, and plowed into us. The whole rear of my car was smashed in. Insurance paid for repairs, but I learned later that the frame was bent and not repaired. The car never drove the same again. 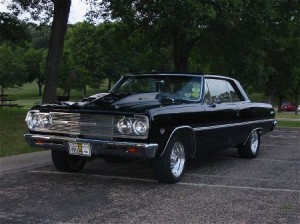 1967 Pontiac Firebird – This was possibly the coolest car I’ve ever owned. I bought it when I came home from Vietnam in 1968. The Malibu was about shot, and I was flush with all that Vietnam intensity and a little mustering out cash, so in came the Firebird. I wasn’t a very practical car, it was small, and by then Frank was born, so getting the Baby seat in and out of the car was a hassle. It wasn’t air conditioned, and the ride was pretty bumpy, but it was a cool car. Kept it for a year or two, and then calmed down and became an adult. 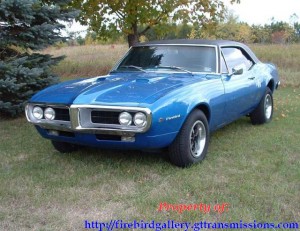 1962 Chevrolet Bellaire – This was our first “2nd.” car. I bought it from a neighbor who was going into the Coast Guard for $75. I was working in Camden at the time, so I used this car for work. I did little to nothing to maintain this car. I called it my “crash” car, in that I really did not care so much what happened to it. I drove it for two years and then sold it for $65, so the car cost me $10 for two years of rides. Not a bad deal. 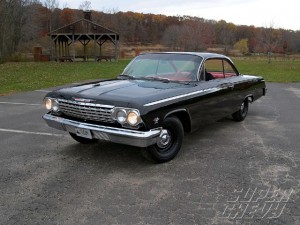 1969 Buick Skylark – As part of becoming a responsible citizen, it was time to get rid of the Firebird and get a “real” car. We bought the Skylark for one primary reason — it had air conditioning. When we got into the car for the test drive at the dealer, Eileen declared she “loved it”. With the salesman sitting the the back seat, the deal was sealed.  This was actually a pretty good car. We had it for about six years, passed it on to my father-in-law who eventually passed it on, etc. Ten years after we got it, the car was still on the road. 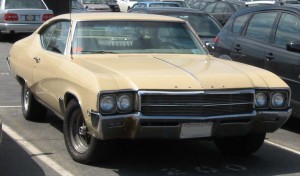 1963 Chevrolet Stationwagon – Another “2nd” car. Bought it from a co-worker who took good care of his cars. I liked this big buggy, and the kids loved riding all the way in the back. Ahhh…the days without seatbelts!

1968 Oldsmobile Delta 88 – Bought this “2nd” car from the same guy who sold me the Chevy wagon. Another good car. Huge engine gas hog, but this car could fly!

1976 Oldsmobile Cutlass Supreme – Our first brand new car. This car cost $5200, which was major money back then. We loved this car. As much as I liked this car, I really wanted a Chrysler Cordoba, but it was too expensive at around $6000. Eight hundred bucks was a lot of difference in those days. 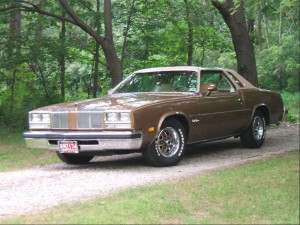 Company Cars — During the 1980’s I drove a series of company cars: 1976 Malibu, 1982 Chevy Celebrity, 1985 Olds Delta 88, and a 1987 Olds Delta 88, which I bought when I left the company. The Olds was a pretty good car, and we kept it for a number of years. It got banged up a bit in a few fender benders, and I hit a deer with it, but I was sad to see it being towed down the street when I gave it to the Salvation Army. 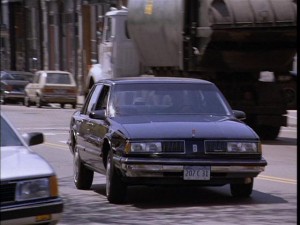 The Lincoln: (Actual picture) -1991 Lincoln Continental. I loved this car! Total luxury! Power everything, and it rode like floating on a cloud! Without a doubt my favorite car of all time.  It had more than it’s share of mechanical problems and costly repairs, but I drove this car until it wouldn’t drive any more. I almost cried when the tow truck took it up the street for the last time. 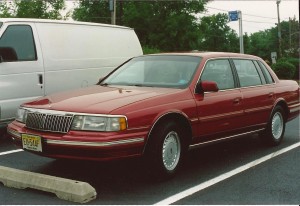 Etc, etc, etc — There have been more cars since then; a pair of twin 1998 Buick Centurys, a 2003 Century, a 2009 Impala, a Chrysler Voyager. None of them has been more than just a car. I think the Lincoln did me in. I knew I’d never afford another one, and nothing could compare to it.  So while there have been cars since, and probably will be more, I stopped caring about cars. Maybe that’s just what getting old is about.

Back at the end of October, a few friends and I flew to Dallas. We went with one purpose in mind: to see the site of the John F. Kennedy Assasination.I was seventeen on November 22, 1963, a senior in high school. Over the years, I’d read several books about the assasination and seen countless TV shows and debates about the truth of what happened. My mental images were strictly from photos and TV. I’d often thought I would like to see the actual place where this terrible history was made. Click on the photos for closeups. 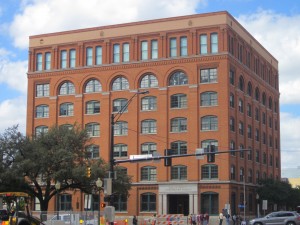 Texas School Book Depository. The name of the building has since changed, but everyone still calls it by the old name. The Plaza is smaller than it looks on TV, but it  looks remarkably like the way it looked in 1963. This years marks the 50th anniversary of the assasination, so there were quite a few tourists. The window Oswald shot from is on the right corner of the building, second from the top. If you look closely at the closeup photo, you can see a box in the window, replicating the “sniper perch” Oswald used. 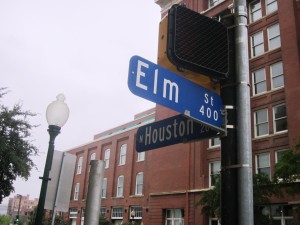 Houston and Elm Streets, the most infamous location in Dallas. Lunchtime crowds turn out that sunny afternoon to see the President’s motorcade. One of the people in the crowd was Abraham Zapruder. He had a movie camera to film the historic event. This is what he saw, standing on the same spot: 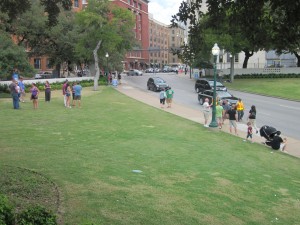 The “Zapruder Film” as his 8mm movie would be ultimately called, became the most watched historical video of all time. 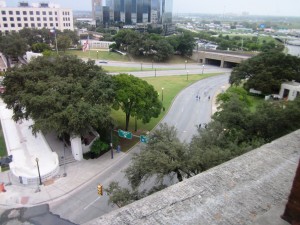 Suddenly, shots rang out. The President was shot. There were three or possibly four shots, depending on different reports. In just a few short seconds, President Kennedy was fatally wounded. Today the locations where the bullets struck are marked by X’s on the street:

There was mass confusion at the scene. Some people thought shots came from behind a fence at the top of a small hillock. This site became forever known as “The Grassy Knoll”:

This is the view from behind the fence on the Grassy Knoll. We were told the original boards from the fence have been replaced many times, as they are frequently taken as souveniers. 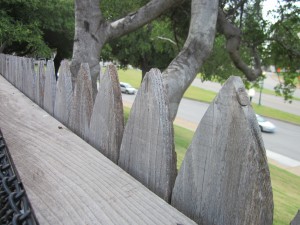 This is the view from the railroad overpass next to the Grassy Knoll, looking back toward Dealey Plaza 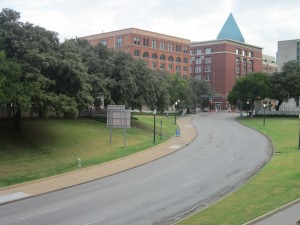 Lee Harvey Oswald worked at the School Book Depository. This is the boarding house where he lived: 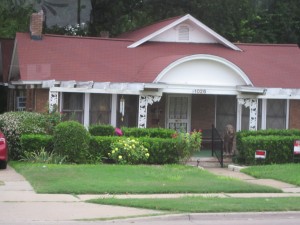 Two days later, Oswald was shot and killed by Jack Ruby, after Ruby walked through this door and down a ramp into the Dallas Jail: 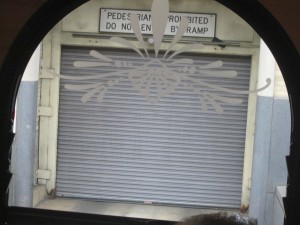 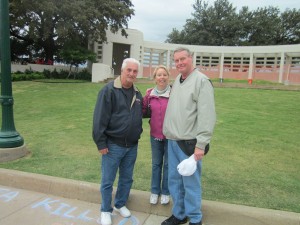 I’ve never really gotten into the idea of blogging. I tried it once or twice, but didn’t take to the notion of constantly posting new things. Since this site is free, I’ve decided to give it another shot. I’ll post things that interest me with no schedule, no plan and no idea when I will post again. There. That works for me.