The first case of the Ebola virus just turned up September 30th in Dallas. A passenger from Liberia got on a plane, flew directly to Dallas, and brought this incurable disease with him.

For the record, there are besides Dallas, daily flights from Liberia to Houston, Detroit, New York, Newark, Philadelphia, Miami and Washington DC. This is just Liberia, not all the other West African countries with the disease. Many, many more flights coming in every day.

Apparently there is no airport screening either in Liberia or the US of people in the early stages of the disease who do not yet present with flu-like symptoms. This is exactly what happened when a man flew to Dallas on September 20,  and presented himself at a Dallas hospital on September 28 with full-blown Ebola. As of this writing he is reported as “critically ill”.

The Ebola Virus (EBOV) causes “a severe and often fatal  hemorrhagic fever in humans and other mammals”. Hmorrhagic fever (VHF) is desribed like this: “All types of VHF are characterized by fever and bleeding disorders and all can progress to high fever, shock and death in many cases”.

The virus, first discovered in 1976, comes from the Ebola River area, located on the Democratic  Republic of Congo (formerly Zaire) in Africa. It was once also known as Zaire Virus and Marburg Virus. 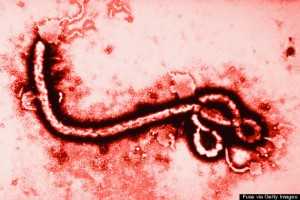 The virus is a nasty looking little critter, but some of the effects on humans are far more ghastly, so much so I won’t post any pictures. Look them up if you want. Suffice it to be said, contracting Ebola and dying from it is a real nasty way to go.

There is no cure.

To date, there is no proven cure for this disease, only prevention.

Rare respiratory virus, paralysis spreads among US kids: Washington (AFP) – An unusual respiratory virus has sickened more than 400 children across the United States, and the emergence of sudden paralysis in some Colorado youths is sparking concern among doctors.The nationwide outbreak of enterovirus D68 — which can cause wheezing and coughing — coincided with the hospitalization of nine children due to limb weakness in Colorado since early August, and officials are investigating if there is any link between the two.

SCHOOLS SCRAMBLE TO HELP TEENS WHO CROSSED BORDER FRANKFORD, Del. (AP) — American schools are scrambling to provide services to the large number of children and teenagers who crossed the border alone in recent months.Unaccompanied minors who made up the summer spike at the border have moved to communities of all sizes, in nearly every state

REFUGEE PLAN SET UP FOR CENTRAL AMERICAN MINORS : WASHINGTON (AP) — The Obama administration is initiating a program to give refugee status to some young people from Honduras, Guatemala and El Salvador in response to the influx of unaccompanied minors arriving at the U.S.-Mexico border.

Do we see a pattern here? For the last several months, illegal aliens have been pouring across our Southern border with a wink and a nod and a look the other way from the Administration. More than a wink, the federal government has actually relocated thousands of childen from Central America into virtually every US state. Now a mystery virus is breaking out all over the country. Several non-major-media websites have written stories about Border Patrol and other front line government officials trying to blow the whistle that these aliens are coming in with virtually no concern about what diseases they may be bringing with them. In the rush to “settle” them throughout the country, only cursory attention has been paid to the health issues these people may have.

The status of these two viruses is very fluid and changing rapidly. News item today indicates that the Polio-like symptoms (limb weakness and paralysis) could possibly be associated with EV-D68. The plot thickens. It’s disturbing to even hear the word Polio today. There hasn’t been a case of Polio in the United States since 1979, thanks to the Salk/Sabin vaccines.  However, Polio still exists (and is spreading) in the Middle East and….wait for it….Africa.

We are a “welcoming” and “inclusive” country today. We invite “refugees” and “dreamers” from all parts of the world. We take them in and they fan out through all fifty states.

But do we health screen all these newcomers? —- Ahh, no we don’t. So they are coming in from all directions, and they just might be bringing more than their suitcases with them.