I grew up with rock and roll. I was there at the beginning.

One of my earliest memories was a story my father told when he came home from work one day. He worked as a sheet metal fabricator and his shop worked on installing a new stage set-up for a local bar. While they were working, a new group was rehearsing. This was around 1955, and I was about ten years old. The group was called Bill Haley and the Comets:

Years later I would learn an older cousin of mine played bass guitar with the group, but quit the band before they became famous — big mistake.

Rock Around the Clock,was a smash hit, and was later used as the theme song for the nostalgic TV Show Happy Days. Of course that was some time after Bill Haley and his Comets were a struggling band from Chester, PA playing at the Crown Point Inn, in Thorofare NJ.

I had an aunt who lived in Philadelphia. Just up the street from her, a bunch of local kids formed a singing group. They called themselves Danny and the Juniors:

Cleveland has the Rock and Roll museum, and fancies itself as the home of rock and roll. This, of course, is not true. The place where rock and roll really took root and grew was Philadelphia.

We all listened to the radio back then (See my post on AM radio), but the new medium was television. And nothing dominated local TV in the Philadelphia area for teens more than  Bandstand. 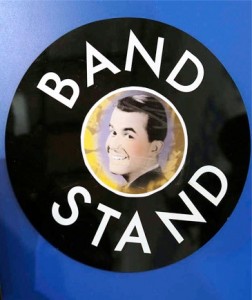 Most folks associate Bandstand with Dick Clark, but in fact Bandstand was the most popular show in Philly for some time before Dick Clark arrived on the scene. In fact it was not originally American Bandstand, but simply Bandstand.

Bandstand was more than a TV dance show for us. It was local. We knew kids who went to the show. We saw them on TV, we knew their names. Bandstand in the early days was personal for us.

When Bandstand went national in 1957, Paul Anka became the first performer to make his national debut on the show. Simon and Garfunkel appeared on the show under the name Tom and Jerry. By 1958 the show was ABC’s top-rated daytime program. Over the years, of course, the show changed and eventually moved to Los Angeles. But in the early days, at its roots, were the Philly stars who made rock and roll.

Three Philly locals, all getting their start on Bandstand:

Dances, dances, dances: Bandstand may have started it, I’m not sure, but in the Philadelphia/South Jersey area in the 50’s and 60’s, dances were everywhere. Dozens of local high schools held dances every week and Philly DJ’s would travel to places like Mepri Hall in Mount Ephraim to spin records to a packed house.

Sometimes we’d travel across the river. Over in Bristol PA, the local fire house held a weekly dance. The wooden floors resounded with the pounding of the kid’s shoes, and a new group with a new song was born; The Dovells:

The next person from Philadelphia created a whole new dance:

A brief segue on Chubby Checker: One Saturday at my drum and bugle corps practice, one of the kids noticed a line of limousines parked at the church accross the street. Being curious, we all went out for a look. It was a wedding; Chubby Checker’s wedding. We watched him going in and coming out. We thought it was pretty cool.

Rock and Roll from Philly? How about Lee Andrews and the Hearts (Long Lonely Nights),Patti Labelle and the Bluebelles (I Sold My Heart to the Junkman), Harold Melvin and the Bluenotes (If You Don’t Know Me by Now), The Orlons (South Street),James Darren (Goodbye Cruel World)?

Then there were The Delfonics (La-La Means I Love You), The Stylistics (You Make Me Feel Brand New),  and The Three Degrees (When Will I See You Again).

These artists set the standard for others who followed including Hall & Oates, Teddy Pendergass, and Boyz II Men.

So that’s it. Rock and Roll began in Philadelphia. It was the heart and soul of the music, the roots. And I was there at the beginning.

One thought on “The History of Rock and Roll, According to Me”