I’m storing my electric trains. Actually, I suppose I’m “re-storing” them; they have been in my attic for 45 years.  Perhaps I should explain.

As a little kid, I was awestruck by the trains. Minitature detailed trains, moving around the track, blowing their whistles as smoke puffed from their smokestacks.  In those days, an electric train set was a kid’s version of “awesomeness”.

Over the years, my parents added to the set, always as Christmas presents.  The collection grew from one to three complete sets, and the platform leayout expanded as well.  My father was very gifted, and created increasingly-complicated layouts with bridges and tunnels and little towns. To this day, I am impressed with his skills.

The trains were Lionel, the premiere toy train manufacturer of the day. Lionel had been making trains since 1900, and my trains were the first of the post World War II series (the company stopped making trains during the war, instead working as a defense contractor).

The trains were sturdy, to say the least.  Manufactured at a plant in New Jersey that employed more than 2000 workers, Lionel Trains were works of art.  Cast almost entirely in metal, the trains were heavy and could readily withstand crashes and falls to the floor off a raised platform. 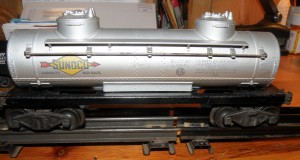 The trains went up every Christmas until about 1955 or so.  By then, I was getting older, and the little kid in me was fading.  About that point, the trains went up in the attic and stayed there…until around 1970.

By then I had a son of my own, so after about fifteen years in storage, the train platform went up once again at Christmas.

We only had a small area for a platform, so I could only set up a small portion of the set.  I did that for about three years, and then once again, the trains returned to the attic.

The trains just came down from the attic.  I know they were up there for forty-five years because the newspapers they were wrapped in were dated 1972.

My thought was that seventy year old Lionel trains might be pretty valuable as collector items.  I knew they are still collected, so I thought I was sitting on a little gold mine  — not so much.

It turns out that many of the collectors of Lionel trains are old; like me. Not as many around anymore. There are other factors too; younger people who do collect trains look for the newer models; often made from plastic, but they have more detail, and are usually smaller scale.

I had a friend of mine who knows such things appraise my set.  The retail value was less than I thought, and selling them to a wholesaler would net me far less than that.  Of course I could put individual  cars on Ebay and try that, but I’m not so disposed.

I pondered this for awhile, and finally realized it wasn’t about the money, not at all.

Those trains are almost all I have left from my childhood.  Everything else is long gone.  As I unpacked them, even after not laying eyes on them for over 45 years, there were instant memories.

From the time I was two years old, the trains meant Christmas.  That’s when they came out for a few weeks each year.  At first, under the tree, but then on to larger and more elaborate platforms with small towns and mountains and bridges.  I can still hear the sound of their whistles and smell the somewhat acrid smell of the “smoke” that came out of the steam engines.

Times were simple then; not like today — not at all like today.  Electric trains held a certain kind of “magic” for a little kid.  Average people didn’t fly in airplanes back then; the railroad was still king of long distance transportation.  When you got on a train, you were going somewhere not around the corner.  Trains inspired thoughts of travel to far away places.  They criss-crossed the country; everything traveled by rail.  There were two rail lines near my home; we saw trains almost every day, mostly pulling freight cars, dozens of them.  There were box cars of every description and color, tank cars, hopper cars, gondola cars. Every passing train evoked the fantasy of hopping aboard an empty boxcar and “riding the rails”.  Actually we did that sometimes.  We often would walk the railroad tracks to a nearby town that had an amusement park. More than once, we jumped into a boxcar on a slow-moving freight for a ride.  Not many twelve year olds do that today, I suppose.

Back then, I never really rode as a passenger on a train, except for those brief freight car hops.  My first time as a legitimate passenger was on a train from Norfolk Virginia, to Providence Rhode Island.  I was in the Marine Corps, and being transported to the aircraft carrier where I’d been assigned.

That trip was almost mystical to me.  There were seven of us making the journey, and we had to change trains in Washington, DC.  We had a wait of several hours between trains, so we explored the Capitol. I remember it was April, and the cherry blossoms were in full bloom.  It was beautiful.  In the train station (Union Station) they had a most amazing device; a machine that played video recordings of songs.  I think it was expensive to play, maybe a dollar, and we stood around watching a video of the Four Seasons singing “Sherry”.  We had no idea we were looking at one of the very first music videos.

From Washington, we traveled to New York City; another stop and change of trains.  This time, we walked to Times Square, another place we knew about but had never been.  It was like nothing we’d ever seen before 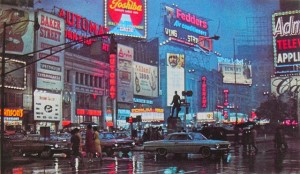 Ultimately the train took us to our destination, but that first train ride confirmed for me that riding the train was a magical experience.

Over the years, I rode the train many times; most often the Philadephia – Washington DC Metroliner.  I still liked it, but times had changed, and the magic was gone.

The trains are all boxed now, stored away for someone else.  As I cleaned them and wrapped them, and boxed them up, I realized you can store more than metal toys — you can store memories.