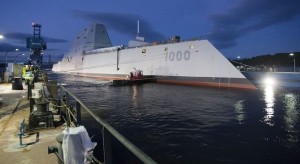 The USS Zumwalt (DD1000) was launched just the other day. It’s odd design is representative of the new stealth techology of Navy ships. The Zumwalt currently is the most sophisticated ship in the US Navy.

And so, you might reasonably ask, what? Why is this here? It’s here for one reason only. I knew Admiral Elmo (Bud) Zumwalt, for whom this ship is named. 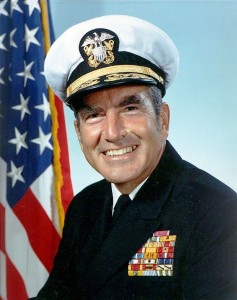 Zumwalt authorized the ground use of the herbicide Agent Orange in Vietnam. His son served in the river patrol forces there, and later died at the age of 42. His grandson had profound birth defects.

While Admiral Zumwalt defended the use of the herbicide, he was nonethelsss personally effected by the possible effects on his son and grandson. He became an advocate for research into the effects of Agent Orange, and formed a working group to lobby and investigate the issue. I was honored to be a part of that group, which was how I met Bud Zumwalt.

“Call me Bud,” was the way he introduced himself as I shook hands with him for the first time. Generally speaking, former Marine sergeants don’t call Four-Star Navy Admirals by their first name, but he insisted. When people mentioned his career in the Navy, he always said, “I was just a sailor.”

He was easy to work with, and was a genuinely kind and caring man. Once, I missed a quarterly meeting at his office in Washington because I’d had my gall bladder out. When he learned this, he sent me a personal hand-written note wishing me a speedy recovery.

When I heard he died in 2000, I had been out of the Agent Orange business for over four years, but I went to his funeral. It was held in the chapel at the Navy Academy in Annapolis. President Bill Clinton gave the eulogy. It was quite a send off.

Over the years, I’ve had the occasion to meet a number of famous people.  Bud Zumwalt was one I’ll remember fondly.