A confession: There are all kinds of things going on in the world today which are extremely bothersome. Almost any reading of the news of the day or the plethora of blogs online can bring even the most upbeat person to despair. Were I to write about any or many of these things, I could be bloviating forever. But I choose not to.

Perhaps because I am old, I am not happy with the world today. I see so many things that disturb me that I’ve learned I must my limit exposure to them, if only for my own peace of mind.  The earlier decades of my life were much simpler, and I believe, better. Because of this, I think I tend to want to write about those times rather than current events.

Writing about things in the past makes me happy. The happiness is bittersweet, to be sure, but remembering the good things from back then seems more pleasing than grappling with the unpleasant realities of today.

I look backward because I cannot look forward, and choose not to look at the present. Moving on, let’s talk about old movies:

Movies shaped our lives back in the day. They were fewer and far more significant than movies today. They were produced by the major Hollywood studios, and often were big-budget productions.

I say they shaped our lives because they were the major entertainment medium. Television was still primitive; black and white small screens and limited programming. Nothing on TV could remotely compare to the big screen.

Going to the movies then was a big event. Adults actually got dressed up to go; men in coats and ties, and women in dresses. 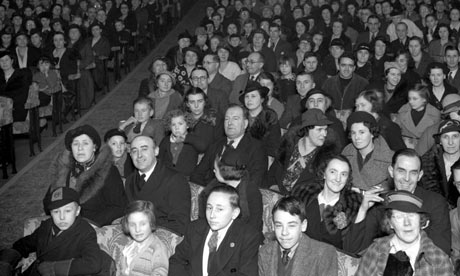 When a new movie was coming out, everyone knew about it. Since people were going to movie theaters regularly, previews, or trailers as they are known today, were very important.

There was no movie rating system back then. All movies were “G” rated, subject to one’s parents permission. Profanity in the movie was almost non-existent. Aside from Clark Gable’s “Frankly Scarlett, I don’t give a damn”, in Gone with the Wind from the 1930’s, movies were squeeky clean.

Here are some of the movies I remember well from back then:

The Magnificent Seven came out in 1960. I was fifteen years old. I remember seeing it in the movie theater, the only place it was possible to see a movie back then. Brenner, McQueen, Bronson,Coburn, all the movie heros of the day. Good guys versus bad guys. Action, adventure, shooting, riding, saving the town — all the elements of a great movie.

Simpler times, and to me, better times. Men were men, women were women, and best of all, there were cowboys. The movie covered all of the stereotypes of the day: Rugged “gunslingers”, men who made a living selling their skills; ruthless bandits, taking from the weak and helpless, robbing and killing at will; and the defenseless villagers, unable to fight the bad guys without the help of the seven heros riding to their rescue.

By today’s standards, the movie was predictable: You knew the good guys were going to win. Back then, the good guys (almost) always won, but if they lost, they did so as heros.

And man oh man, what heros!

Yul Brenner: I mean, what was he anyway? Chinese? Very exotic looking guy. Turns out he was actually Russian, and his mother was part Mongolian, hence his looks. Most of us only knew him from his role as the King of Siam in The King and I. Now here he was a cowboy! And he was bald! And what a cowboy! Gunslinger personified. Cool, quick on the draw, an obvious leader of good guys.

Steve McQueen: Coolest of the cool. The quintessential rebel. A rebel in real life too. He joined the Marine Corps in 1947, and was demoted to Private seven times. Even during his younger years, McQueen ran away from home at the age of fourteen to join the circus, was a member of a gang, and served time in reform school. In The Magnificent Seven, he was Brenner’s number two guy; covering his back and always ready for the fight.

James Coburn, Charles Bronson, Eli Wallach, Robert Vaughn… This ensemble cast was extremely well created. More than half a century later, I can remember my friends and I jumping up and down cheering for this bunch of good guys.

And the music: The Magnificent Seven had one of the most memorable theme songs in movie history. Play the song to anyone from my generation, and they will immediately know it: bomp, bomp bom bomp, bom bom bom bomp bom bomp….

My first musical. I hated it when I saw it in the theater for the first time, especially all the faggy singing and dancing. But…the girls all loved it, so it was smart to say you loved it too. One thing I remember from them was the influence on clothing: the Sharks all wore colorful shirts and tight black pants. Soon we too were wearing similar outfits. I had a purple/red shirt that I thought was supremely cool.

As suburban kids, we didn’t quite grasp the whole gang thing in the movie, but I doubt that even back then the gangs danced as much as these guys. I certainly didn’t know anyone who could dance like that.

But West Side Story wasn’t about gangs anyway; it was a romance movie, which is why all the girls loved it. It was  Romeo and Juliet in the Big Apple.

The movie did have some pretty good music, and that’s about all I have to say about it.

My favorite movie of all time. Lawrence of Arabia was massive, filmed against panoramic vistas with a cast of thousands (literally). This was an era decades before CGI, so producing a scene with a thousand warriors required a thousand extras, no small feat.

Perhaps as much as anything, this film was based on a real person. It may have been the first history-based movie I ever saw. T.E. Lawrence was a most unusual man. There’s no doubt he was brilliant. He was eccentric, and he may have been a little insane, but he was a military genius. Many of his actions during World War I played a major factor in shaping the Middle East of today.

The movie had a huge cast of international stars, led by Peter O’Toole as Lawrence. The movie took over seventeen months to film in Jordan and Morocco. One scene, recreating the attack on Aqaba, required the construction of over 300 buildings to recreate the town as it was during WWI. The film was nominated for ten Academy Awards and won seven, including Best Picture. Peter O’Toole was nominated for Best Actor, but lost out that year to Gregory Peck in To Kill a Mockingbird.

The film, and it’s musical score are on many different lists as one of the best movies of all time.

War movies were very popular in the 60’s, war in this case meaning The Big One, World War II. War movies were not terribly realistic then, and were always good guys versus bad guys themed.

This film depicted the lives of Allied prisoners in a German prisoner of war camp, and their attempt to escape. Typically, the American and allied prisoners were the good guys, heroic, caring, and of fine moral character. The Nazis of course, were cruel and treacherous.

The cast included several who also appeared in The Magnificent Seven: Steve Mcqueen, James Coburn, Charles Bronson, as well as other famous stars of the day including James Garner.

Like many of the others, The Great Escape was very predictable, but we didn’t care. Back then, we believed the Americans were always the good guys, and the good guys always won. Simpler times, better times.

No one would deny that Stanley Kubrick created unusual films. His film Dr. Strangelove was no exception, turning the entire cold war mentality into a satiric punchline. Dr. Strangelove was a cosmic leap of change in movies. Nothing was sacred any longer, and anything could be laughed at.

I grew up during the Cold War. We truly believed that nuclear war with the “Ruskies” was a real possibility. In grade school, we had “duck and cover” drills, when we would hide under our desks in the event of a nuclear attack. Especially after the Cuban Missle Crisis of 1962, we thought World War III was just around the corner. And no one would make fun of that — except Stanley Kubrick.

It’s difficult to describe the shock value of this satire today, but back then this film had a significant impact. It was certainly groundbreaking, and probably played a role in changing movies that came later.