The Flying Saucer sold over a million copies, and rose to the #3 position on Billboard rankings for 1956. It was the very first of what would be called a “mashup” recording today. It’s novelty made it very popular, and it was constantly being played on the radio. This tune opened up the floodgates for a tsunami of strange and weird songs. Continuing the space theme was The Purple People Eater:

To get a sense of how times have changed since then, watch Ray Stevens sing about  Ahab the Arab (1962)

Everything is so serious these days, we seem to take too little time to just chill. Sometimes I just like hearing  a silly song:

Finally, one that I’ve never grown tired of. Warren Zevon at his best: 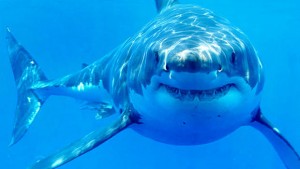 Okay, I’ll admit it, sharks fascinate me. Of course the thought of being in the water with one scares the hell out of me, but as long as they’re in the water and I’m not, we’re just fine.

I’m also a major fan of the movie Jaws. I saw it in the theater when it came out in 1975 and at least once a year since. Yeah, that’s 42 times, but really it’s more than that. We watch it aleast once every summer, and inevitably watch it again sometime later in the year. I’m guessing with no exageration, I’ve seen Jaws seventy-five times. I guess I’m sort of a Jaws Junkie:

And like the movie, we have a Great White shark hanging around New Jersey these days, and her name is Mary Lee.

Ocearch is a scientific organization that tracks sharks. They have been in business since 2011. Mary Lee is a mature female Great White they caught and tagged off Cape Cod on September 17, 2012. At that time she was sixteen feet long and weighed  3456 pounds. She is named by the way, after the mother of the Ocearch expedition leader.

Ocearch captures live sharks and attaches a tag to their dorsal fin, which “pings” a satellite whenever the shark comes close to the surface, allowing the shark to be tracked in real time.

In the almost five years Mary Lee has been wearing a tag, she has been tracked for almost 40,000 miles. She has traveled up and down the East Coast, from Cape Cod to Florida. She has gone east as far as Bermuda, and quite recently been as close as one mile off the Ocean City, NJ beaches.

The thing that’s interesting about Mary Lee, is that while she is tracked almost daily, she has not actually been seen in years, giving rise to speculation that she may be considerably larger these days.  Tracking provides  location data, but there are still gaps.

Why, for instance, does Mary Lee go up and down the coast, back and forth on a regular basis? There have been suggestions that she has a boyfriend who hangs out in Cape Cod, and she goes to visit, gets pregnant, then heads out to sea to deliver her pups. No one really knows.

We do know she’s become very popular. She even has a Twitter account, @MaryLeeShark, with over 115, 000 followers, and a Facebook page with 70,000 likes. Local newscasts up and down the coast follow her progress, and report it an on-going basis.

As with many things, Jaws has a basis in reality. In 1916, five people were killed by a shark in New Jersey; in Beach Haven, Spring Lake, and sixteen miles up the Matawan Creek. Author Peter Benchley denied that this was inspriration for his novel, but read the link at the bottom of the page and see what you think.

There are more than 480 species of sharks, but the Great White is the best know (possibly because of the movie), one of the largest, and certainly the most feared. A full grown Great White can easily exceed twenty feet in length, and weight 4300 pounds.  Between 1958 – 2014, there were 2899 reported shark attacks on humans,  548 fatal, around the world.  About seventy attacks are reported every year.

The Great White shark is ancient, and fossils going back sixteen million years have been found. They are found around the world, but prefer water temperatures between 54-75 degrees (F), which is why they are so prominant off the US East Coast. Click the links below for all the information about the Great White you might ever want.

So if you’re down the Jersey shore this summer, take a look out toward the horizon — not that far out, actually. She’s out there, all two tons of her, and I’m sure she’d love to meet you.

The Shark Attacks that were the Inspiration for Jaws –Smithsonian Magazine