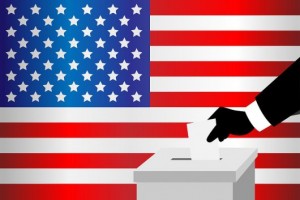 We are just a few weeks away from what appears to be the most contentious presidential election of modern times. If presidential primaries are any indication, we might see record turnouts as Hillary Clinton and Donald Trump battle for the White House.

Every day there are new polls, new assessments, and new predictions. To be sure, no one knows who will win, but as political sport, the prognosticators are out in force.  Predictions are often based on emotions and personal feelings; handicapping is assessing the situation using as much practicality as possible. Let’s attempt a bit of the latter.

We’re not really looking at the candidates here, but rather the individual states; their histories and their political tendencies coupled with the current reality on the ground. Contrary to most beliefs, national elections are not about the country as a whole, they are about individual states. States are different, as are the people in them. These differences determine who wins and who loses.

At the end of this piece, I will make my own prediction. My prediction record is 100 percent, because I have never done it before. I may be right, I may be wrong. I’d enjoy hearing your comments on my method and your thinking on this issue.

Presidential elections are won or lost in the Electoral College. States are apportioned college “votes” based on population. The total number of votes is 538, based on the members of the House of Representatives (435), the Senate (100), and three additional votes for the District of Columbia. It takes 270 votes to win, as simple as that. The person who receives 270 or more votes becomes President. 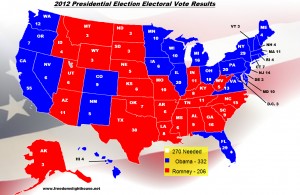 Most of us are familiar with the “red/blue” electoral map, red for Republican and blue for Democrat.  For the most part, states tend to retain their color, often for many years. This is because the voting constituency tends to remain the same. Population shifts can cause changes, but generally take years to do so. For this reason, it is usually reasonable to predict that a state like Massachusetts will go “blue”, and a state like Alabama will remain “red”. The few states with a tendency to change back and forth more frequently are known as “swing states” and are usually the most closely watched during an election. The number of swing states tends to vary only slightly from election cycle to cycle.
All this being said let’s look at the 2016 election, region by region to see what is happening:

New England is notoriously a blue region, and we should expect mostly the same this election. Clinton should prevail in Massachusetts (11), Rhode Island (4), Connecticut (7), and Vermont (3).

States to watch:Two states to watch in this region: New Hampshire (4) and Maine (4). New Hampshire is considered the most conservative state in the region, and Trump showed some early polling progress there. As of this writing, Clinton is polling six points ahead. Trump is faring somewhat better in Maine, and appears to be rising in the polls. Main splits its electoral vote, so Trump could take away vote or two.

If any red shows up in New England, it could be a long night for Hillary Clinton.

State to watch: The Mid-Atlantic only has one state really “in-play” — Pennsylvania. Normally a blue state, the state seems to at least the potential for “swinging” over to red this year.

Pennsylvania has two major cities, Philadelphia and Pittsburgh, and a handful of smaller cities. Much of the rest of the state is small rural towns. Pennsylvania’s economy was once largely industrial; coal mining and steel production being two. Both of these industries have been crippled in the current economy, and the future of coal mining in general is under assault by environmentalists. The one bright industrial area in the state, gas and oil fracking, is also under environmental attack.

The rural areas of Pennsylvania are sandwiched between the two cities. Philadelphia has always been a Democratic stronghold, and will likely remain so. Western Pennsylvania, including Pittsburgh seems to be shifting toward Republicans. Lack of industry coupled with an aging population seem to be propelling this. Another factor is that in the rural areas, like much of the country, voter turnout has fallen in recent years. Much of this population is white, and  non-college educated, a group largely seen as leaning toward Trump. If large numbers of this group decided to vote this year, there is a possibility the state could go from blue to red.  This a state to watch. 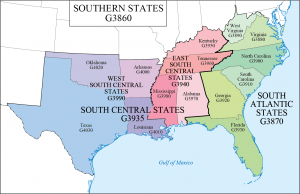 Much of the South has been traditionally Republican territory in recent elections. Red states tend to include West Virginia (3), Kentucky (8), Tennessee (11), South Carolina (9), Georgia (16), Alabama (9), Mississippi (6), Louisiana (8), Texas (38), Oklahoma (7), and Arkansas (6).  One can be reasonably certain these states will remain red this time. There are, however, three Southern states that bear watching.

Virginia (13) is an interesting example of demographic change. Home of the Confederacy, Virginia had been a red state since the 1980’s years of Ronald Regan. In 2008, however, Virginia turned blue, along with neighboring North Carolina. Both states went for Barrack Obama twice.

A good part of the changing demographic in Virginia is the increase of federal workers in Northern Virginia. This part of the state has undergone a population boom in the last ten years. Thousands upon thousands of people working for the government or government contractors have poured in. Many of these people tend to vote Democrat, simply overwhelming the past nature of the state to vote Republican. As of this writing, Clinton is polling about 5 percentage points ahead of Trump, so the blue trend may prevail here. Nonetheless, this is a state worth watching.

Florida (29) The biggest prize in the traditional South, and one of the most difficult to predict. Florida is another state, that while traditionally red, went to blue in the last two elections. It is also one of the most contentious (Bush/Gore 2000), largely due to a highly diverse population. Florida is a “must win” state for Donald Trump. Without winning Florida, it becomes hard to visualize him winning the election.

Racial and ethnic demographics will surely play a role in Florida. The state is 60 percent white,  20 percent Hispanic, and 17 percent black. A large percentage of the Hispanic population are Cubans, who tend to vote Republican. Florida also contains the highest percentage of people over the age of 65 in the entire country.

As of this writing. Florida is another “dead heat” in polling between Clinton and Trump. Of all the states to watch, not only in the South, but the whole country, Florida may well be the most important. It is not unreasonable to suggest that whoever wins Florida will win the election. 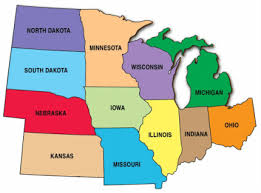 The thirteen states of the Midwest have stayed roughly the same for the last two elections. There are some possible changes this year.

Minnesota (10) and Illinois (20), both blue states, will likely remain so.

Iowa (6): Traditionally a farm state that leans conservative has shifted a bit to the left in recent years as there are fewer family and more corporate farms and young people have not gone into the family business, but off to college instead. Iowa went for Obama in 2012. Currently however, Trump is polling about three points ahead of Clinton, still within the margin of error, but nonetheless, this makes Iowa another “battleground” state.

Wisconsin (10): Wisconsin has flip-flopped Democrat/Republican a number of times over the years, but has been a “blue” state since voting for Al Gore in 2000. There are some factors in play that deserve attention. First, neither Clinton nor Trump won their primaries in Wisconsin. The winners were Bernie Sanders and Ted Cruz, candidates to the respective left and right of the current nominees. Governor Scott Walker (R) has been a controversial  figure, battling the teacher’s union. The Tea Party has also played a role in Wisconsin politics. Clinton and Trump are currently polling within 4 points of each other, making Wisconsin a “key battleground” state because of it’s high number of electoral votes.

Michigan (16): While Michigan has favored Democrats in the last four Presidential elections, the state historically has favored Republicans more often. Michigan is another state where Sanders beat Clinton in the Democrat primary. Clinton is currently polling about five points ahead of Trump in Michigan. That being said, Michigan is a “rust belt” state that has lost thousands of manufacturing (mostly auto) jobs to overseas trade, a position largely favored by Democrats. Trump’s appeal to disaffected, laid-off workers could tilt the balance here.  Michigan is another “key battleground” state.

Ohio (18): The crown jewel of the Midwest, politically speaking, and another critical state for Donald Trump. Ohio has voted for the Presidential victor more often than any other state (93% of the time). It has been both red and blue, voting for George W. Bush twice and Barrack Obama twice. Clinton and Trump are polling within two points of each other in Ohio, making this state an absolute horse race.  Ohio is another “rust belt” state damaged by jobs lost from foreign trade. Eight years of being a “blue” state does not seemed to have helped the Ohio economy, so it seems reasonable to see a swing to red in this state.

Colorado (9): Colorado is another state that went red for Bush and blue for Obama. Currently Clinton and Trump are polling about three points apart, too close to call. As a battleground state, Colorado is unpredictable. Traditionally red, the state has been becoming increasingly liberal, and in fact Bernie Sanders beat Hillary Clinton here in the Democratic primary. On the other hand, Ted Cruz beat Trump here, the result of an influential right-wing Tea Party population. Colorado is a toss up state.

Nevada (6): Another state that voted twice for Bush and twice for Obama. Clinton and Trump are tied in the polling here. However based upon the primary turnouts, Republicans seem to outnumber the Democrats in Nevada by a significant number, making this a close call, but seemingly leaning toward Trump.

The Pacific Coast and Offshore:

My count gives Hillary Clinton a pretty solid 16 states and 201 electoral votes. The same method gives Donald Trump 23 states but only 191 electoral votes. Since neither candidate has enough “solid” states to win, the outcome of the 2016 Presidential election will be determined by the remaining 11 “battleground” states.

My totals give the victory to Donald Trump over Hillary Clinton in a very tight race, 275 to 263.

As a footnote: my prediction includes Wisconsin going to Trump and New Hampshire to Clinton. If these two states reversed, New Hampshire for Trump and Wisconsin for Clinton, the result would be an absolute tie, 269 to 269, throwing the election choice to the House of Representatives.

Presidential elections are often personality contests, decided by the voters individual reaction to the candidate. I believe 2016 is different, in that there are two relatively unpopular/unlikable candidates. This time, I think more people will vote on their own political philosophies, liberal or conservative. Normally, this would maintain the status quo of previous elections, but this cycle seems to have triggered far more visceral reactions than I can remember in my lifetime. With neither candidate being strong, even within their own parties, it seems to me this could be the year for the apple cart to tip over, changing traditional expectations.

I may be right, I may be wrong. What is your opinion?