I’m sixty-eight years old. I’ve come to learn that as you age, you tend to look backward as much as forward, perhaps more.  Right now I’m thinking about the things that changed my life; those events that put me on a different path than the one I was on. To be sure, many events change our lives, but most are subtle, we hardly notice them. This first one, however, was dramatic and changed everything that came later.

I was thirteen. It was a warm evening in late spring 1959. I’m guessing it was about 7pm, and a friend and I were out riding our bikes. Then we heard something….music.

It sounded like a marching band. I heard drums and (later I would learn) bugles. It wasn’t coming from far away, so we got on our bikes and rode toward the sound.

About a half mile away, on a ballfield, a drum and bugle corps was practicing. I’d never seen anything quite like it: teenagers marching around the field in military precision. There were both boys and girls, and the girls…they were beautiful. I was in the early throws of puberty, so”beautiful” was fairly generic for me, but that is how I remember it.

They had come to the field in buses. On the side of the buses was Vagabonds Junior Drum and Bugle Corps – Haddon Heights, NJ.

I was hooked. I wanted to be a part of that, but had no idea how to do so. I was too shy to go up to anyone and ask them. I went home and told my mother about it. She suggested I write them a letter. I told her it was probably only for kids from Haddon Heights, but she leaned on me to write the letter anyway, so I did. With no idea of an address, I simply wrote “Vagabonds, C/O Postmaster, Haddon Heights”. Little did I know that letter would change my life.

Several evenings later the phone rang. It was the wife of the director of the corps who told me that if I was interested in joining, I could come to their practice the following Tuesday.

My father drove me up, and I joined. As simple as that. In those days, all you had to do was want to join. It was terribly expensive; dues were ten cents a week. I told them I wanted to be a drummer and came home with a pair of drumsticks.

My abilities were not in the field of drumming, so I changed over to playing a bugle. I was a “rookie”, but week by week I learned. I made new friends and began the adventure of a lifetime. 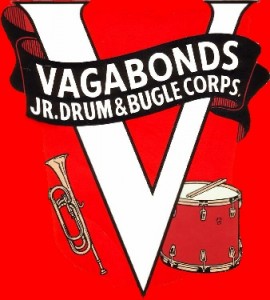 Okay, so I said this changed my life. But how did it change it?

First of all I made all new friends. I was never the most popular kid in school, actually I was a bit of a geek. I was the “smart” kid, a bit of an ass kisser.  No one ever picked on me, but  I wasn’t Mr. Popularity. Thinking back on it, I was mostly a tight-assed goodie-two shoes. I was type-cast if you will, and I think it was not terribly satisfying.

Drum corps was different. First of all, no one knew me, so I could re-create myself. It turned out that the kids in corps were mainly hard-scrabble blue collar kids. They weren’t “band” kids, they were the kids who beat up the band kids. Drum corps was not a band, not in the wildest stretch.

I learned to curse, profusely, I learned to smoke. I was now hanging out with “real” kids, and I liked it – a lot.

Drum corps taught discipline. We learned to march. We learned to play an instrument, and we learned to do both at the same time. It was about parades, but mostly competitions. We competed against other corps in the region, and for the first time in my life,  I got to travel. 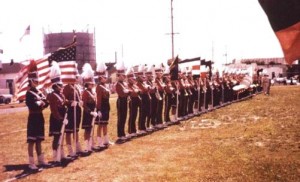 We traveled all over the Mid Atlantic region. During the summer, we had parades and contests in New Jersey, Pennsylvania, Maryland and New York. I saw places I’d never seen, and met new people all the time – drum corps people, a type of person that even to this day I cannot explain to anyone who doesn’t know what I mean. 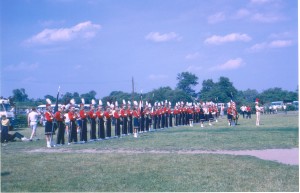 In 1961 we got to travel to Miami, Florida for a national competition. Here I was, a kid fifteen years old, who had hardly been out of New Jersey before drum corps, taking the longest trip of my life.

So, from 1959 to 1964 I had the time of my life – a great adventure for me and one I’ll never forget. But how was this “life changing”? The answer to this is the photo below: 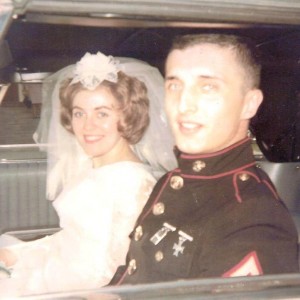 There are many events in our lives. Some of them are major, and we don’t even know it at the time. That evening in 1959 changed everything.