Did you know we pay for the uniforms for the Afghan Army?

Did you know that since 2007 we have bought that army 1.3 million uniforms along with an additional 88,000 pairs of pants and it cost U.S. taxpayers $93 million dollars?

Would that little factoid bother you a bit more if I told you that $28 million of those dollars were wasted?

Gather around the campfire kiddies, I’ve got a little story for you.

First, a little background: When I got out of the Marines in 1968, we were still wearing olive drab (OD), the same color field uniform worn since World War II. They looked something like this: 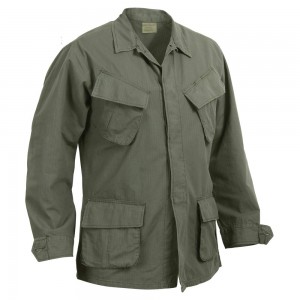 This was the color used by American troops not only in Vietnam, but before that in Korea. This color was used during World War II  in the jugles of the Pacific, in winter time in Europe, and in the desert fighting Rommel. Same color.

Around 1969, the first “camouflage” uniforms were issued. They looked something like this: 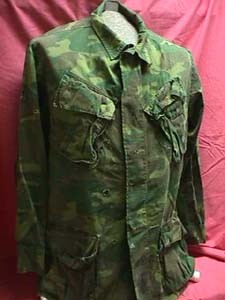 Ostensibly, this camouflage made our troops less visible to the enemy,  blending in with the surrounding terrain. Obviously this depends on the pattern matching the terrain, and the military has used and experimented with any number of colors and patterns with such names as “tiger stripe”, “woodland”, “chocolate chip” and “cookie dough” for desert terrain.

The military continued to experiment with camouflage, and in 2001, the Marine Corps, thanks to computer technology,  introduced its “pixelated” uniform MARPAT (Marine Pattern) featuring small square blocks of color which was considered an improved camouflage technique. The field has blossomed since then.

It seems that back in 2007, the Afghan Defense Ministry decided it needed new, distinct uniforms for the Afghan National Army (ANA). Up until then, the US had been supplying the Afghans with uniforms from a variety of sources, both manufactured locally and “hand me downs” from US Department of Defense (DOD) stock.

It gets a little fuzzy at this point, but apparently US officials in Afghanistan approved the purchase of new uniforms, by-passing normal DOD methods for obtaining uniforms for foreign soldiers.

Disregarding normal procedures, US officials allowed the Afghan Defense Minister to “shop online” for a camouflage pattern he liked. He found one. The problem was this particular pattern was owned by a Canadian company, and was “proprietary”, or trademark protected. Using this pattern would require that royalities be paid to the Canadian company.

Using a “sole source” contractor requires a number of specific procedures be performed and permissions given. None of this was done. In addition, the color of the pattern, a forest green, did not seems at all appropriate for a largely dry desert country like Afghanistan.

No matter. The Afghan Defense Minister liked what he saw, and American officials were not willing to tell him “no”, even after it should have been realized they were violating Pentagon rules by authorizing the contract.

But they bought them anyway, from the Canadian company. In all, they bought 1,364,602 uniforms . In addition, the standard US design apparently wasn’t good enough, so they replaced buttons with zippers, added hook and loop fasteners and more pockets, making each uniform even more expensive. According to the  Special Inspector General for Afghanistan Reconstruction (SIGAR) report that finally dimed this thing out, this added about 43% to the cost of each uniform over the standard non-proprietary uniform.(1)

Even as this was happening there was a dispute within the Pentagon. The DOD contracting office apparently tried to stop this purchase but were overrode by US officials in Afghanistan.

Keep in mind that throughout all this no one ever tested this pattern to see if it would actually be an effective camouflage for use in Afghanistan, a normal part of the purchasing process.

In addition to concluding that the DOD paid $28 million more than necessary for the uniforms, the report strongly suggests the camouflage used could be more harmful than helpful:

“As a result, neither DOD nor the Afghan government knows whether the ANA uniform is appropriate to the Afghan environment, or whether if it even hinders their operations by providing a more clearly visable target to the enemy…” (1) The Inspector General’s report was sent to Defense Secretary Mattis in June.

There is nothing in the report that suggests criminality.  In fact, the report strikes a neutral tone, only pointing out that rules were apparently broken and/or there was some very sloppy management of taxpayer dollars.

So…. A million here, a million there.

We’ve been in Afghanistan, “nation building” for fourteen years.  Estimates on the cost of the wars there and in Iraq vary, from two to six Trillion dollars. Yes, that’s Trillion with a  deliberate capital “T”.

Let’s just say it’s been $3 Trillion. In that case, a $28 million dollar overage is a rounding error in petty cash.  And that’s exactly the problem.  We’ve reached the point where it’s easy to throw away the people’s money.  There are even stories that suggest we may be paying for a “ghost army” of Afghan soldiers and police that don’t even exist.

Back in 1965 author David Halberstam wrote a book about Vietnam entitled “The Making of a Quagmire”.  If Halberstam were alive today, he would probably be astonished to learn the quagmire he wrote about back then was just a little mud puddle.