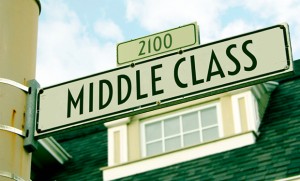 The American Middle Class, the driver of the US economy, is in retreat.  By definition, the middle class worker makes a decent salary and spends money. This makes companies profitable, and they expand and hire more workers. Government collects more taxes, and expands programs. Middle class workers pay to educate their children and save some of their money. This increases the numbers of educated workers and builds personal wealth. The middle class is the hub of the wheel around which everything else turns. Today, the hub is shrinking. and the wheel is getting wobbly.

Manufacturing jobs in the 50’s and 60’s created the American middle class. The American “dream” of owning a home and a car, buying a television and having an annual vacation became reality for millions of people. Most of all, the middle class had opportunity for upward mobility, the idea that they and their children could look forward to a brighter future.

In 1955, the five largest employers in the United States were General Motors, U.S. Steel, General Electric, Chrysler, and Standard Oil. These companies employed a total of 1.4 million people. Today, the largest employer in the United States is Walmart, employing  2.2 million workers. Other retailers in the top five employers include McDonald’s, Kroger, and Home Depot.

Fully 14.8 million Americans are employed in retail sales, and another 13.3 million in the leisure and hospitality sector. The vast majority of these jobs fall in the minimum wage range.

Sociologists in the 1950’s first began describing the class as primarily the new white-collar worker. The upper middle class consisted of college-educated salaried professionals and managers. The lower middle class was comprised of skilled craftsman and lower-level managers. According to the sociologists, middle class people had a comfortable standard of living, economic security, and could rely on their expertise to sustain themselves.

The Pew Research Center recently reported on the slippages of the middle class:

“The American middle class is losing ground in metropolitan areas across the country, affecting communities from Boston to Seattle and from Dallas to Milwaukee. From 2000 to 2014 the share of adults living in middle-income households fell in 203 of the 229 U.S. metropolitan areas examined in a new Pew Research Center analysis of government data. The decrease in the middle-class share was often substantial, measuring 6 percentage points or more in 53 metropolitan areas, compared with a 4-point drop nationally … The shrinking of the middle class at the national level, to the point where it may no longer be the economic majority in the U.S…” (1)

As the middle class recedes, the gap between the haves and the have-nots  increases. In 1978, the typical middle class work made a salary of about $48,000 (adjusted to 2010 dollars). In that year, there were about 393,000 people in the top 1% of wage earners.  That adjusted salary for that worker in 2010 decreased to about $34,000, while the number of wealthy 1% earners increased to over 1.1 million people.

The rich are getting richer, stockholders in prosperous companies are getting richer. The middle class grows poorer by the day. There is no “trickle down” in today’s economy. Companies are not created to benefit the worker; they are created to benefit the owners and the stockholders. Stockholders in public companies constantly pressure management to make more and more money and push stock prices upward. This puts enormous pressure on management to continually look at ways to save money by reducing a singular large cost — employee salaries and benefits.

One of the reasons for the decline of the middle class is undoubtedly the loss of our manufacturing base to globalization and the rise of technology. Simply bringing manufacturing back is not an answer, as more and more manufacturing can be done by machines and robots. Other countries, however, are manufacturing in the high tech world. We’re not doing such a good job. Let’s look at an example: 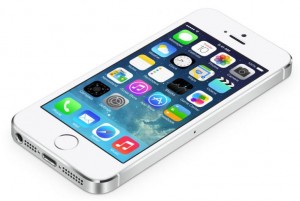 The IPhone — popular and efficient. Who makes the money from the sale of IPhone components?

American company,  Apple,  jobs out all but 6 percent of component manufacturing to non-American countries. By the way, the phone is assembled in China, but the components are made elsewhere.

Even the American automobile has the majority of its parts made elsewhere and shipped to the US for assembly.

So who looks out for the middle class? Anyone?

I don’t claim to have answers, maybe no one does. But I believe this is something we should be talking about and asked our politicians about, especially in relation to both current and proposed trade agreements. Policies being considered today will effect our children tomorrow, and if recent history is any indicator, we need some serious policy changes.

In the meantime, I strongly recommend you watch this: