Last time we discussed two possible alternative “green” energy sources to replace our current use of fossil fuels such as coal and natural gas. We looked at wind energy and solar energy, and neither looked very promising, so let’s look at a few more: 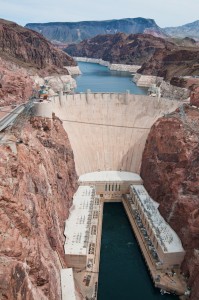 The picture above is the Hoover Dam in Nevada, one of the largest hydroelectric dams in the United States.

Hydroelectricty, or electric generated from the use of moving water, is widely used around the world, and accounts for some sixteen percent of all electricity produced worldwide. About seven percent of the electricity used in the United States comes from this method, mostly in the western portions of the country.

The process is pretty straightforward. A dam is built on a waterway, creating a reservoir of water higher than the outflow beyond the dam. Water flowing downward from the reservoir is piped to a water turbine and generator, creating electricity.  There are several variants on this theme, but most function in a smiliar manner (see diagram below). 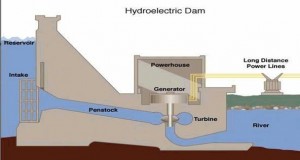 Power generated from large dams is often cited in gigawatts. A gigawat is one billion watts.

Let’s stop for some quick math. Remember our average home that uses about 30 kilowatts a day?  Well, one gigawatt is enough power for over 330,000 homes! Quite a bit of power.  The Hoover Dam in Nevada, pictured above, has a capacity of about 2.1 gigawatts, or  almost 700,000 homes. Indeed, Hoover Dam provides power to users in Nevada, Arizona and California.

Dams like the Hoover Dam are massive constrution operations. The dam took thousands of workers over five years to build between 1931-1936 at a cost of $49 million, which would be about $833 million today.  Over one hundred workers were killed during the construction of the dam.

The use of dams for electicity is limited. First, and obviously, the dam needs a source of water (a river). The building of a dam can require the dislocation of people and wildlife in the creation of the dam and reservoir. It can have a not insignificant impact on the ecology of the area. As such, the construction of large-scale dams is not practical in heavily populated areas, and new construction of dams has dwindled since the 1980’s. While there are thousands of dams nationwide, most are too small to be practical as significant sources of electricity.

A footnote on this: Proposed construction of new dams, especially large ones, are often met with steep resistance from enviornmentalists. A 1954 proposal for a massive five gigawatt damn in Alaska to be known as the Rampart Dam, was strongly opposed for years until President Jimmy Carter killed the plan in 1980 by turning the proposed area into a national wildlife santuary.

This is one of the more unusual methods suggested as a way to produce electricity. Essentially, biomass is anything organic that can be burned: wood, crops, trees, paper, and even manure.  Biomass currently accounts for about 1.4% of the electricity produced in the U.S.

Looking into this, I found parts of it to be amusing. “Biomass” can be almost anything you can burn: tree limbs, old stumps. leaves, grass clippings or wood chips. It can be old plants, like dried corn stalks, sugar cane, or even bamboo. In short, it’s burning organic trash to make heat, which in turn can fire boilers, which can turn turbines and make electricity.  Nothing new, and nothing much to see here folks. Every time you build a fire in your fireplace or fire pit, you’re creating “biomass” energy.

Burning stuff to make energy isn’t a new idea, but if biomass energy gets rid of some waste products, expecially stuff like manure, it can’t be all bad. Right? Actually that’s debatable.

While this form of energy is “renewable” (grow more trees), it’s not necessarily clean. Burning all these products produces the same dreaded CO2 that burning coal produces. Fuels produced from biomass are not particularly efficient, and expensive to produce. And, it’s not just about picking up dead tree limbs. On a large scale, it’s about actually growing crops to be burned, which takes up lots of room, and seems just a tad bit silly for the minimal return. This too can invoke the wrath of environmentalists — “strip farming the Amazon” etc.

Another example of this is the use of corn for ethanol, which helps farmers unload their unwanted corn, but actually takes more energy to create than gasoline from oil. The cost of production and the pollution from using the corn to make biofuels is no bargain. As far as replacing existing carbon fuels, it’s a very bad trade off. 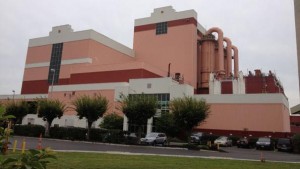 One area which isn’t actually biomass per se, but has some use is “trash to energy”. This is simply a spin on the old style incinerator. Instead of just burning the trash however, it is used to heat boilers to make electricity.  An example of this is a plant like this in Camden County, NJ. In operation since 1991, this plant burns about 1050 tons of trash per day and produces 21 megawatts of electricity from the burning, enough for about 700 homes. Not major, but the combination of keeping the trash out of landfills and providing some energy at the same time seems reasonable.

Time for another bottom line:

Hydroelectic power is great, but building large dams is a limited exercise.  It seems unlikely that hydroelectricity will ever produce much more than the current seven percent in the U.S.

Biomass seems even less likely than wind or solar to ever become a major energy player. After all the hype it received a few years back, it really does seem to be much ado about nothing.

So now we’ve explored four “alternative” sources from a pretty short list of possibilities. Three of them,  wind,  solar, and biomass account for less than six percent of our current electric supply combined.  Including  the hydroelectric seven percent, we’re still looking at a pretty paltry thirteen percent.  And frankly none of them offer any short term promise of being any more significant than they are today.

So are there no real answers? —  Well, yeah, there are.  There is an “alternative” source out there that is safe, reliable, climate friendly, and efficient.  It’s the one real possibility to reduce our use of carbon fuels. Strangely, it’s hardly ever mentioned in “green” or “save the planet” circles.  The best possible alternative has a very bad name. We’ll look at that next time.